Ayrshire golf is Open for business 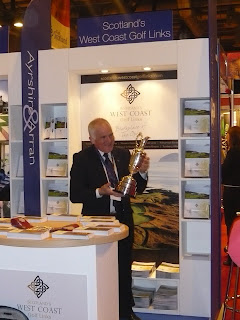 Ten of Scotland’s finest links golf courses today launched a new marketing initiative aimed at attracting more golfers from around the world to the Ayrshire Coast.

The group which embraces three Open Championship courses, including this year’s venue Turnberry, was launched officially by Jim Mather, the Minister for Enterprise, Energy and Tourism who unveiled both the printed materials and the new website http://www.scotlandswestscoastgolflinks.com/

Mr. Mather is pictured at VisitScotland’s showcase tourism industry event in Glasgow with the famous Claret Jug and the replica of the original Open Championship Belt first played for in 1860 at Prestwick. He said, “This is a great example of the golf industry working together in the current difficult economic times to attract visitors from across the world to our great country. Golf is a key theme of our Homecoming celebrations this year and the Open golf championship at Turnberry in July will bring thousands of golf fans to Scotland.

“Our Drive it Home initiative alone, which seeks to attract international golfers to Scotland for free rounds of golf at hundreds of courses across the country, has the potential to attract more than 8,000 golfers to Scotland, creating an additional £14.3 million in income for the Scottish economy. The Drive It Home campaign has already seen 3,200 potential tee times snapped up with golfers from across the world registering for a four-ball every five minutes.”

The golf course group have come together to promote the strength in depth of courses on the stretch of Ayrshire coastline between Irvine and Turnberry.

Ian Bunch, secretary of Prestwick Golf Club was delighted to see the group being launched, “The level of co-operation between the courses since the idea was first discussed has been excellent and simply by working together we are certain that we can improve the golf product on offer and the profile of Ayrshire as a golfing destination par excellence. It is already well known for hosting The Open at both Turnberry and Troon but by bringing together ten links courses of almost unmatchable quality in depth we hope to increase not only rounds played but see a clear increase in bed nights and secondary spends.”

To achieve this, the group has created a marketing plan that involves not only the courses but the accommodation and transport providers and food and drink providers across the area.
Hotelier Stuart Watt from Troon’s South Beach Hotel was equally delighted with the initiative, “The area needs this really badly and it’s such a positive move in an Open Championship year. Ayrshire needs to promote its quality golf offering and this collection of courses allows us as a hotel to really lift the golf product we offer quite dramatically.”

Whilst the group is focusing on marketing the quantity and quality of golf on offer within the 22 mile radius it is also looking forward to developing new collaborative product and using the internet to create a strong relationship with both the golf visitor and the travel trade. The message is not just being left to sit passively on its website, but is being supplemented by a host of add ons, with the group already having launched its own blog, newsfeeds and dynamic content.

Representatives of Scotland’s West Coast Golf Links were pictured not only with the Championship Trophy but also a replica of the original Belt which was first played for at Prestwick in 1860. 2010 sees the 150th anniversary of the first Open Championship played over the Ayrshire links and it is expected that the anniversary will act as the catalyst for a pilgrimage to the links golf courses of the West Coast of Scotland.

Posted by The Club Manager