Marking the 150th Anniversary of The Open 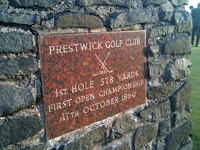 The scene, with four golfers making their way towards the first tee in watery autumnal morning sunshine is not an unusual one in itself being replicated on courses across Scotland and beyond by tens of thousands of Sunday morning golfers.

The difference this morning however is the location and the date. Accompanied by the Club Captain Brian Morrison, Club Secretary Ian Bunch and Club Pro David Fleming, I was in fact walking towards The Cairn which marks the location of the first tee of the first Open Championship which teed off exactly 150 years earlier over Prestwick Links on the Ayrshire coast.

That was a Wednesday and on that particular Wednesday morning a small group of eight roughly dressed individuals made their way towards the wind-strewn sand hills of Prestwick from The Red Lion Inn at The Cross which doubled back then as the clubhouse for Prestwick Links.

According to the history books, “Under his arm each carries a strange assortment of wooden implements. They march, like prisoners under guard, accompanied by four members of the gentry, whose role it is to ensure that none among them shall transgress.”

For certain they were not aware of what they were about to set in motion but it was on this day 150 years ago that history was made by the eight individuals made up of “golf professionals”. Professionals in the sense that they made a living form the game through as a caddy, club or ball maker.

They were unknowingly making history by playing the first ever round of The Open Championship resulting in the presentation of The Belt to Willie Park from Musselburgh who won that first Open with a score of 174 and a two stroke cushion over Tom Morris who was at that time the Keeper of Prestwick’s green.

The red morocco belt was purchased for £25 by the members of Prestwick and subsequently retained by Young Tom Morris after he won it in three successive years from 1868-70. The Claret Jug, still played for now, was then purchased jointly by Prestwick, The Royal and Ancient Golf Club and The Honourable Company of Edinburgh Golfer and first played for in 1872.

So it was with this burden of history that our band of four men and a dog took the short walk to the historic mound of stone and the starting point for the first ever Open Championship.

Now if you’ve played Prestwick before you’ll know that the first runs alongside the Glasgow to Ayr railway line with out of bounds on the right. It is a rather intimidating opener. Well the “old first” exists in the sense that the tee is there and the green is there, the green being the current 16th.

Apart from that there is no fairway and the thirteenth green stands in your way! The fairway as I saw it seemed to be a path about five yards wide running down from the fourteenth tee. That made this an even more intimidating opener.

Add to this that every golfer in Scotland has his own Open Championship memories and who wouldn’t have wanted to be standing in our place. My own first Open memory was as an eight year old at Muirfield chasing Tony Jacklin in a buggy (he in the buggy not me) for an autograph. Various spectating highlights have followed over the years at Troon, Turnberry, The Old Course, Carnoustie, Birkdale and Lytham and my own single zenith as a spotty 17 year old youth caddying for English Amateur Chris Poxon at Royal Troon. We (he) may have missed the cut but it is my own special albeit tenuous “professional” connection with the greatest of golf championships.

It may be gilding the lily slightly to say that it was an emotional moment but there was a genuine sense of history in teeing the ball up on that spot at that moment and I have to say it was with some pride, for all I think, that each drive left the tee – straight - following that historic route.

The original 1st hole measured 578 yards and the talk on the tee was how Tom Morris Jnr could hole out over that distance in three strokes using hickory shafts and a gutty golf ball. I still haven’t figured it out but it would have required me to hole out with a four wood to have replicated the feat!

As it was the green was reached in three and unusually two putted for a five. Elation.

As I played the rest of the round, I couldn’t help, as I criss-crossed those hallowed fairways, but compare Prestwick again with all of those aforementioned championship links and how well this challenge still compared. So hallowed indeed were those fairways that I quite respectfully avoided playing from most of them!

Prestwick remains one of the purest links golf challenges that a golfer can take on and while it will never see an Open championship again, it will for sure continue to be high on the list of courses you must play before you die. Indeed it should be very high on that list.

In those early days Prestwick, however, continued to host the Open and did so intermittently until its swan song in 1925 when sheer pressure of crowd numbers contributed, it is said, to the home favourite MacDonald Smith losing out to his American challenger Jim Barnes.

Indeed as part of the 150th celebrations, the pro shop has taken a series of the images from that last event and produced a wonderful range of canvasses. David Fleming explained, “There is such a wealth of history in the club archives that it seemed a natural project to follow and they have been incredibly popular with visitors and members alike. When you scale the images up to 40 inches you can see that even in 1925 hospitality tents had already made an appearance and the crowds around the players must have made it almost impossible to play competitive golf!”

(Since it was formed in 1851, David Fleming is only the eight professional in the club’s history.)

Indeed the history is all around you at Prestwick. Replica belts and trophies, original scorecards, photographs, winners boards. Yet the contradiction at Prestwick is that while it retains its tradition it is far from lost in it.

Since becoming the club secretary Ian Bunch has, in his own style, transformed the way the club is seen from the outside. First class visitor facilities and a genuinely warm welcome are offered at Prestwick along with increases in tee time availability for the tourism markets; a position that in itself encouraged other golf courses in the area to follow suit.

In addition each year Prestwick recognises the role that the golf travel sector play in its success by hosting a wonderfully quirky “six-some” event.

The cherished highlight was surely the first hole but our game was rounded off with an equally indelible memory coming down the 13th hole.

Playing into the wind, the club pro once again out hit us both by seventy five yards into the wind. As we approach our balls we witness the gap decreasing with David Fleming’s ball coming towards our own being pushed back down the fairway assiduously by the beak of a rather large black crow!

Patently tiring the crow looks up towards the incoming golfers and decides to beat an escape with the golf ball firmly fixed in its beak and heads for the beach. Imperiously now, and sensing escape with a Taylor Made Penta, it flies off and lands fifty yards away on the boundary fence separating course from beach; differentiating in-play from Out of Bounds.

And yes you can guess the next part. It had a last thought about where it was going to drop the ball, turned towards the Firth of Clyde, decided the pro needed penalised and neatly dropped Mr Fleming’s ball Out of Bounds!

Hole to the amateurs on the day of the first professionals!

On a day such as this it was quite clear that the spirit of 150 years ago was still very much present in the south westerly Ayrshire breeze and hell if we want to romanticise the presence of our feathered friend on this day then who is to condemn us!

Thank you Prestwick for what you started and to Ian Bunch and David Fleming for letting me share a little part of it with them.

You can find out more about the history and heritage of not only The Open Championship at Prestwick but also Troon, Turnberry and the other seven links golf courses on Scotland's West Coast.
Posted by Admin